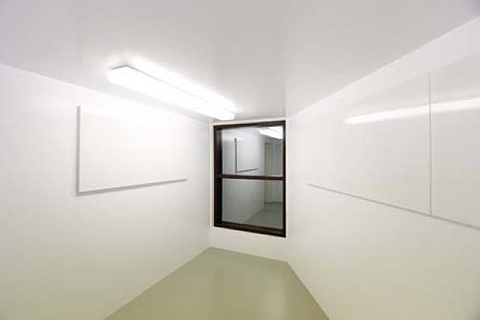 Today I read the Weisse Folter catalog for Gregor Schneider’s show at K21 in 2007. I’ve been a fan of Schneider since I found out about him my freshman year of college, and it’s been kind of amazing to follow his work since then. Wiesse Folter translates to “white torture,” which is another installation/environment designed by Schneider. It’s evocative, perhaps, of Guantanamo Bay, and other various institutions of either torture or aide. It’s, as to be expected with Schneider, totally amazing.

But what I found most impressive was a particular essay included in the catalog, The Challenge by Brigitte Kölle. Not to sound bourgeois or imply that I was looking for myself in another artist or artwork (lol), but what Kölle says in relation to Schneider is basically everything that I want to do in art, life, etc. I scanned the article, it’s not the best scan but whatever. Here are two excerpts, followed by a link to the pdf.

and further, about Schneider himself:

Beyond the entire article that I was geeking out over, I grabbed some other quotes from other essays in the catalog and transcribed them below, mostly for my own reference:

“Whatever the case, it must be a place of utter disorientation, a non-place that does not serve as a counterpart or an extension to the human body, a place where everything is reduced to self-perception devoid of all references. A place that has no room for life in the usual sense, but that, by the same token, may be the most concentrated metaphorical space.”
(13, from the essay Reversing and Advancing by Julian Heynen)

“A formal expression of the Situationist city, New Babylon, which the Dutch artist Constant started to draw in the 1960s, is a universe where all climatic conditions (lighting temperature, hygrometry, ventilation, olfactory and sound atmospheres) are under control, modifiable at will, where everyone can create situations that can relate to the sexual as well as to fear emotions, in a permanent game, endlessly renewed.”
(98, from an excerpt of Worrying Conditioning of Space by Philippe Rahm)

“A strange topology is hidden in the obviousness of televised images. Architectural plans are displaced by the sequence places of an invisible montage.”
(102, from an excerpt of The Overexposed City by Paul Virilio)

“In structural terms what is called the end of the world is actually the death of a sphere.”
(103, from an excerpt of Spheres by Peter Sloterdijk [this shit is insane?])