INVOCATION OF MY DAEMON LOVER

On Friday night my friend Jarett read as part of San Francisco’s Quiet Lightning reading series. This event in itself is not unprecedented, but what had me excited, and what had him calling me two months ahead of time to make sure I had the night off work was that the reading was held in the Westerfeld Mansion. The mansion itself has quite a history, but my primary interest (and Jarett’s as well) was that Kenneth Anger (along with Bobby Beausoleil) lived in the house when Anger was in San Francisco (four years where, apparently, Anger shot very little footage). The result of Anger’s time in San Francisco was 1969’s eleven minute Invocation of My Demon Brother. 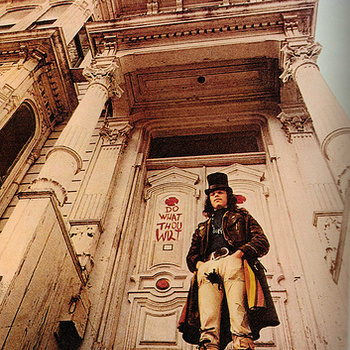 Jarett’s prime goal (other than, you know, reading) was to hunt down a framed portrait of Bobby Beausoleil that was purported to be in the house so he could discover the photographer and finally get a decent copy of the image–the current circulating copy is apparently a shitty jpg that Jarett color-corrected in the 90s with only a moderate knowledge of photoshop. We couldn’t find it. After everything was wrapping up we attempted to ask the owner if he had any idea what had happened to it, but… let’s just say after a few minutes listening to him, it’s, uh, unlikely.

My primary goal, on the other hand, was more puerile, a desire to recreate the sort of ridiculous stop-motion scene from Invocation of My Demon Brother in which a demon statue ‘walks’ down a stairwall to deliver a crudely sprawled ZAP, YOU’RE PREGNANT, THAT’S WITCHCRAFT sign near the film’s end. I made my sign ahead of time (which, I didn’t notice until I got to the mansion and Elly pointed it out, I left out the second “T” in “that’s,” but OH WELL it still works) and made sure I had my camera. Went to the reading, drank some beer and, honestly, only half-listened to the reading (I was in the fucking Westerfeld mansion, it was hard to have any desire to pay attention to anything outside of the structure itself). Afterwards people started clearing out, and with Jarett & Dean’s assistance, we went to the stairwell (which we had located before the reading started) and took the photos.

Ultimately in my insistence I neglected to realize that since I am a human and not a small demon statue, that the angle would need to be corrected and very low to get precisely the same effect. Since we were somewhat in a hurry this didn’t happen (and I didn’t even realize it until I was compiling the above animated gif while looking at screenshots from the actual film), but I don’t think it matters that much. Also in comparison you can tell that there’s some slightly terrible wallpaper that replaced the house as it was when Anger shot the film (there were, of course, also light swirls & shit being projected over the wall in Anger’s film).

While waiting for the BART train at 1:20 AM last night I rewatched the film on my phone (wow great screening conditions M) for the first time in a while (I didn’t want to rewatch it before going to the mansion out of a desire to mete space and memory in a more organic methodology). The film is actually a lot more interesting than I remembered it being, and the soundtrack works really well (formerly I always remembered it as being a little annoying).

This entry was posted in Art, Film, Work. Bookmark the permalink.